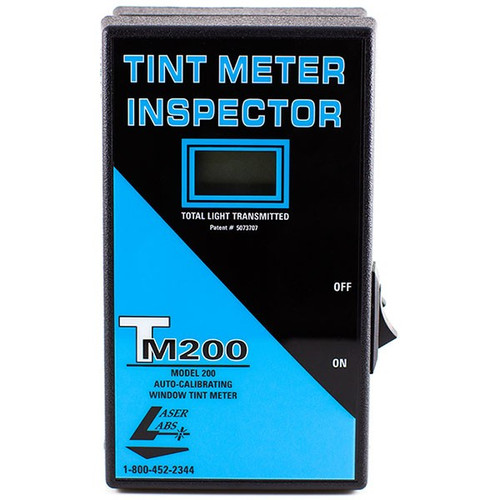 The Tint Meter Model 2001/2 is a hand held device manufactured by Laser Labs, Inc. of Scituate, Massachusetts that measures the amount of light that passes through a window. It measures the total amount of Visual Light Transmission (henceforth referred to as VLT) through a window and any coatings (tint film) on that window. The device was designed, as an affordable way for law enforcement officers to measure the total VLT of a window after it has been treated with aftermarket window film. The Model 2001/2 differs from the Model 1001/2 in several different ways. The first and most important is that it has the capability of measuring every window on an automobile, not just the side roll down windows. It can measure windows up to 1/2 inch thick. Second, it utilizes a two-piece design.  Third, it requires a different method of calibration.  Finally, it does not have an auto on-off switch, so care should be taken to shut both parts of the unit after use to prevent battery drainage.

The Tint Meter Model 2001/2 is housed in two separate plastic enclosures.  Each enclosure is 5.25 inches tall, 3.5 inches wide, and 1.5 inches deep.  On the front of 1/2Box A1/2, the unit that does the electronic processing, is a label noting the manufacturer, the model number, performance specifications and some simple directions.  There is a clear window on the label to view the LCD readout.  The second unit, 1/2Box B1/2, that houses the light source has five exposed light emitting diodes (L.E.D.).  The center L.E.D. is used for the Tint Meter1/2s light source for measuring light transmission, and the surrounding four L.E.D.1/2s are used for visually aligning the two units together.  Also on Box B are two suction cups for attaching the llight box (Box B) to the inside of rear windows that may be difficult to test with one operator.